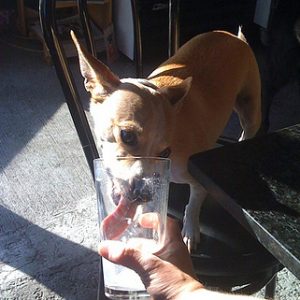 The first part of this series focused on tongue color, the most important feature in tongue diagnosis.  We now focus on tongue shape, the second most important feature.   Tongue shape is a good indicator of excess and deficiency-related imbalances in the body. An example of excess could be too much heat in the body.  This, in turn, leads to a deficiency in fluids, essentially burning them off. Another example would be a deficiency of heat leading to an excess accumulation of fluids (“dampness”).

A normal tongue should be soft without being overly floppy. You should easily be able to extend the tip beyond the mouth but it shouldn’t flop out like Rin Tin Tin.  It should taper towards the tip…not being to blunt-ended like the Rolling Stones emblem, or too pointy as in Gene Simmons from Kiss. Several more obvious aspects of tongue shape are covered here. For those wanting to delve in further, check out the references at the end.

Tongue thickness reflects the status of Blood and fluids in the body. In Chinese medicine, fluids are all liquids other than the Blood: Digestive secretions, tears, mucus, sweat, urine, saliva, etc. A  thick tongue indicates fluid accumulation or “dampness. The tongue may be so swollen that it presses into the teeth, resulting in scalloped edges along the sides of the tongue. (This is how mine looks at the moment). For an example of a swollen tongue, check out the Rolling Stone’s emblem (!) or visit Giovanni Maciocia’s “Tongue Gallery” and look at examples 6 and 9.

A swollen tongue with normal tongue body color indicates “Spleen qi deficiency”, is a common pattern in the west (1, 2). The Spleen in Chinese medicine controls fluid and nutrient metabolism and transport. (It’s capitalized to distinguish it from the western medical idea of the spleen.)  If the Spleen lacks the vital energy (qi) to regulate fluids in the body —  due to chronic stress, poor diet, irregular eating habits, or other influences — it’s reflected in excess fluid accumulation in the tongue.  Spleen qi deficiency (which I’m dealing with) results in fatigue, bloating, loose stools, weakness in the arms and legs, and with progression, more serious issues (1).

A swollen tongue tongue may also indicate yang deficiency, with yang being the heating and motivating principle in the body (1,2). This is often seen in folks with long term illnesses. Yang deficiency leads to dampness, reflected in a pale (cold), wet tongue.

There are other reasons for a swollen tongue. Sorting through these also depends on tongue body color.  Sometimes only a part of the tongue is swollen, with the location of the swelling pointing towards the body system(s) impacted by dampness. More on this in a future article.

A long tongue sticks out farther than normal from the mouth and will generally be red with a red, pointed tip. (Refer back to Gene Simmons, here.) This indicates excess heat, more specifically, in the Heart (1).  Interestingly, this heat often originates elsewhere — for instance, in the Liver —then impact the Heart as it progresses. This makes the Heart a bit harder to work with as, imbalances elsewhere (Liver, Kidneys, etc) need to be addressed first. In Chinese medicine, the Heart is involved not only in circulation, but also or mental state. The Heart houses our awareness and emotional thoughts, and is the seat of joy (1).  Heart heat may manifest in insomnia, restlessness, incoherent speech, mania, dry mouth, thirst, dark yellow urine and other signs (2). Eat cooling, moistening and/or calming foods like beets, carrots, mulberries, mung beans, corn, oats, brown rice, mushrooms, goat milk and ghee to name some (3, 4).

A short tongue is one where the tip doesn’t or barely extends beyond the mouth when you stick it out.  For an example of a short tongue, click over to the Tongue Gallery again and look at example 13. Contraction of the tongue may result from coldness, heat or improper fluid metabolism in the body.

A pale and short tongue points to coldness from qi and yang deficiency. This contracts the tongue. Use the warming, qi-moving foods referred to earlier for support. A swollen and short tongue is from improper fluid metabolism. This leads to fluid accumulation in the muscles and sinews, in turn, interfering with the ability of the tongue to be extended. Again, warming and qi moving foods may help here.

If a tongue is short and red, dryness from excess heat may be contracting the tongue. Think of an old dried up piece of leather. Again, revisit the cooling/moistening foods mentioned in the first article in this series. In other cases, a short red tongue may indicate serious health issues that are beyond the scope of this article (2).

OK, so this isn’t actually a shape…  A quivering tongue is one that shows rapid small movements when extended. Often the tongue will be pale (I see this a lot in clients). There is usually accompanying fatigue and digestive issues, as well as a history of stress. Use the foods already discussed for supporting qi and Blood.

If the quivering tongue is red and dry, it indicates that excess heat in the body is generating a pathogenic factor called “wind”. As its name implies, wind is associated with movement. Wind may cause tremors (or seizures in extreme cases), other irregular body movements, pains and aches that keep changing locations and other signs (4). More serious issues require the skills of a practitioner, but for milder symptoms, bump up the cooling and moistening foods in the diet.

If you’ve made it this far in the series, great job!  It is, admittedly, pretty dense stuff.  Stay tuned, next time we get into what your tongue coat means.