An excerpt from an article I wrote for Plant Healer Magazine & Herbaria Monthly & for the Upcoming Good Medicine Confluence, an awesome botanical, re-wilding and grass roots gathering this June here in Durango (Check them all out here: http://planthealermagazine.com/ and here:http://planthealer.org/intro.html ) 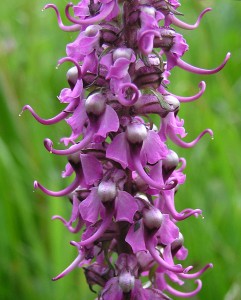 Pedicularis is doubly named for lice. It’s botanical name derives from the genus to which lice belongs, Pediculus; then there’s the “Lousewort” part. The names come from an old belief that livestock develop lice after eating the plant. Though I’ve been using Pedicularis off and on for about 7 years, my scalp has remained blessedly free of creepy crawlers!

Another common name for Pedicularis is “Wood Betony”, a name that, confusingly enough, also belongs to Stachys officinalis.
Hundreds of Pedicularis species grow throughout the world. We have about 6 in Southwest Colorado, the smallest around 4 inches and the tallest, the aptly named Towering Lousewort, reaching 4 feet or more (1). One of the bigger species of Pedicularis, Fern Leaf Lousewort, grows along the Elbert Creek Trail (~9000 feet elevation). Higher up in the mountains is the much more delicate Elephant’s Head, Pedicularis groenlandica, with it’s pinkish/purple flowers that look like, well, Elephant’s heads. Fern Leaf Lousewort is big enough that just plucking a few leaves from each plant quickly takes care of my needs for the year. For Elephant’s Head, the species I’ve used the longest, the whole aerial portion of the plant in flower is collected. I use them interchangeably, though it seems like Fern Leaf may be a little stronger, medicinally speaking. That, together with the fact that one need not collect the whole aerial portion of Fern Leaf for medicine making, has led me to stop harvesting Elephant’s Head.

Pedicularis is helpful for muscle pain, and perhaps in part by acting as a skeletal muscle relaxant (2) it may ease the tension placed on injured joints by the surrounding musculature. The first time I used it was the day after a minor motorcycle accident, when my teacher Pam had me take a squirt of Elephant’s Head tincture from the student clinic. The pain was gone within about 10 or so minutes and the tincture also quelled the residual nervous system static from my close encounter with a car the previous day.

Pedicularis has since become a good friend, easing the sore muscles that result when someone over 40 decides that learning jiu jitsu would be a good idea. I sometimes use it prophylactically before a training session, one, to reduce the muscle soreness the following day and, two, to reduce the anxiety around setting myself up for yet another potential butt kicking.

Pedicularis can be quite sedating for some folks, while doing nothing at all in others. A couple/few squirts of either Elephant’s Head or Fern Leaf Lousewort tincture is mildly calming for me, while a 6’ tall, 200+ pound friend was looped out after a similar dose. Incidentally, this was after his own calamity of the motorcycle kind. Another friend, on an herb walk, described a mildly pleasant sensory trip after eating a small bit of Pedicularis leaf. She is one of those folks who has a sensitivity to plants that some of us more energetically-dense types lack. Not jealous, not jealous……

So, in essence, Pedicularis is a relaxing (for some) and pain relieving (for some) herb that is handy post-motorcycle crash or for those times you know you will be sore the next day after doing things that you should or shouldn’t be doing. It’s also good support also for those whose shoulders live perpetually around their ears due to chronic stress.

A note on harvesting: Pedicularis is semi-parasitic (technically, it’s a hemiparasite, but we’ll save that for the botanists). It will pick up constituents from any neighboring plants it has tapped into, whether Willow (super useful addition) or Senecio (not so much) (2).

For those who will be here for the Good Medicine Confluence in June, if you sneak away for a jaunt up Pass Creek Trail on Engineer Mountain, you will reach a beautiful marshy meadow after a mile or two that may be full of Elephant’s Head. (Warning: My judgement of distance is terrible). I usually go to see it in early July, but will scout before the meeting and let folks know if it’s up yet. According to some books it may be but, as the saying goes, plants don’t read books.

← Artist's Conk Elderberry (Sambucus) - One of my favorites! →

Meet some high country wild plants early in the growth season. Stay tuned for the next parts of the series to meet them again farther along in the season and...

Identifying Wild Mushrooms: How not to pick the wrong mushroom

My 10 all time favorite oils…Notes for Aroma Class

For educational purposes only.  This information is not meant to supplant the advice of a qualified medical practitioner.  I'll be adding these over...

Part one of “Mushromatherapy” introduced some of the more ubiquitous scent molecules responsible for characteristic aromas of some of our (making an...

Medicinal Mushrooms – What makes them medicinal? (Besides polysaccharides…)

What do ‘essential oils’ do for the plants and fungi that make them?

Hint: It isn't all about us people : ) https://youtu.be/yumwPH9XT8I

Get My 5 Easy Steps to Quick Weight Loss for Free When You Subscribe!