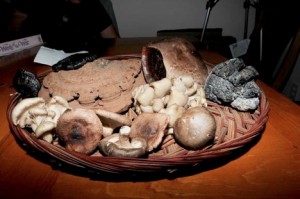 Durango herbalist says fungi have a role in health realm

There are 15,000 identifiable species of mushrooms, and only 2,000 of those are edible. The most dangerous toxins have delayed effects, taking hours or days to show. Microbiologist Anna-Marija Helt teaches workshops about mushrooms, their medicinal properties and how to identify poisonous ones. From left to right: reishi, artist conk, oyster, shiitake, portabello and phellinus. 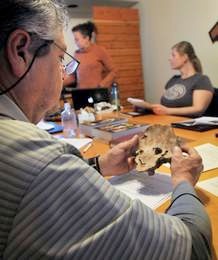 Ancient Romans have said that mushrooms are the “food of the Gods,” and Anna-Marija Helt teaches a class about mushrooms and the medicines that can be made from them. John Velasquez, left, looks at a mushroom while Helt, center, explains mushrooms to Bridey Conway and the rest of the class.

Microbiologist Anna-Marija Helt says one way to identify mushrooms is to cut off the head of the mushroom, place it on a piece of paper and cover it with a bowl. When the mushroom releases its spores, a person can see them on the paper.

“Let food be your medicine, and medicine be your food,” according to a Hippocratic writing. Paul Ambrose and Karen Mee look at mushrooms passed around during Anna-Marija Helt’s lecture about mushrooms and their medicinal qualities.

As a microbiologist who worked in cancer research, Anna-Marija Helt knows complete remission of the scourge is often a long shot.

But as an herbalist who studies fungi, including mushrooms, she believes mushrooms play a complementary role in the treatment of cancer.

“In Asia, mushrooms are a standard part of cancer treatment,” Helt told a class covering the medicinal use of mushrooms last week in Durango.

“In Asian philosophy, it’s unethical to treat cancer with chemotherapy without using mushrooms to mitigate side effects,” Helt said.

Mushrooms have been used to boost the immune system and as an antioxidant in the Asian countries for centuries, Helt said.

Helt earned a doctorate in microbiology at the University of Washington. Her thesis on molecular mechanisms of the human papillomavirus was based on work done at the Fred Hutchinson Cancer Research Center in Seattle.

Helt did research in the fields of cancer and infectious diseases for 15 years.

She won a postdoctoral fellowship to study dengue virus replication at the School of Public Health, University of California, Berkeley.

She also was a research technician at the Fox Chase Cancer Center in Philadelphia.

Burnout led her to get off the scientific fast-track to study herbal medicine, which satisfied a long-held interest in wild and garden-variety plants.

Helt didn’t take a direct route in pursuing her dream. She first took a side road and opened a cafe in the South of Market district in San Francisco.

A student at the California School of Herbal Studies in Forestville who frequented the cafe often chatted about her studies, sparking her own interest, Helt said. But the purchase of Greg Tilford’s Edible and Medicinal Plants of the West was the final push, she said.

“I was instantly captivated,” Helt said. “I never looked back.”

She came to Durango last November and now consults as an herbalist and gives workshops about the medicinal qualities of mushrooms.

A number of mushrooms grow in the San Juan and La Plata mountains, Helt said. Herbal medicine enthusiasts who don’t want to hike the backcountry in search of mushrooms or who can’t identify species can find mushrooms available at local health-food stores.

It’s dangerous, fatal even, to misidentify mushrooms, Helt said. She said historians believe that Roman Emperor Claudius, who ruled from 41 to 54, was murdered by poison, possibly in mushrooms.

Mushrooms can be eaten fresh or ingested in tea, tinctures or powder, Helt said.

A website search reveals that studies in Japan, China, Brazil and England tentatively show mushrooms reduce the effects of radiology and chemotherapy in treatment of cancer patients.

An American Cancer Society website, referring to the shiitake, said studies of animals found the shiitake has properties that fight tumors, lower cholesterol and inhibit viruses.

“However, clinical studies are needed to determine whether these properties can help people with cancer and other diseases,” the post says. “It is reasonable to include shiitake mushrooms as part of a balanced diet.”

Meet some high country wild plants early in the growth season. Stay tuned for the next parts of the series to meet them again farther along in the season and...

Identifying Wild Mushrooms: How not to pick the wrong mushroom

My 10 all time favorite oils…Notes for Aroma Class

For educational purposes only.  This information is not meant to supplant the advice of a qualified medical practitioner.  I'll be adding these over...

Part one of “Mushromatherapy” introduced some of the more ubiquitous scent molecules responsible for characteristic aromas of some of our (making an...

Medicinal Mushrooms – What makes them medicinal? (Besides polysaccharides…)

What do ‘essential oils’ do for the plants and fungi that make them?

Hint: It isn't all about us people : ) https://youtu.be/yumwPH9XT8I

Get My 5 Easy Steps to Quick Weight Loss for Free When You Subscribe!