Reishi: The Mushroom of Immortality 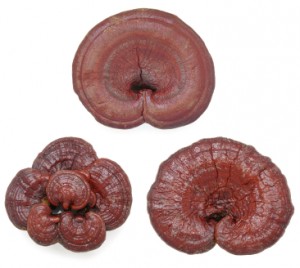 Reishi (Ganoderma lucidum) has many names reflecting it’s appearance — “Varnished Conk” — and it’s value as a tonic — “Mushroom of Immortality”, “10,000 Year Mushroom”, “Queen of Mushrooms” and “Sacred Fungus”. It has been used for 4,000 years in Asia as a tonic and medicine to fortify the mind and body, and to promote long life, wisdom and happiness (1,2). Known as Ling Zhi,or Ling Chih, in China, it symbolizes such concepts as success, well being, good health, divine power, longevity and immortality in Chinese culture (3). In Traditional Chinese Medicine, it is classified in the highest class of overall tonics, which explains some of the names mentioned above. It raises qi, and was so valued that it became a common motif in Asian art in representative and abstract forms (3). Sometimes reishi was depicted simply as itself, sometimes as a cloud. You may have seen these convoluted, scallop shaped clouds in Eastern art. This is my attempt at doing one on the computer: 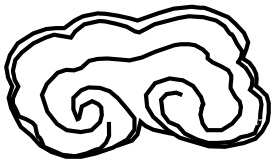 The mushroom was sometimes shown as a sceptor (symbolizing power) or as part of a “rebus” (a plant bouquet symbolizing immortality)(3).

Reishi is a saprophyte, meaning it grows on dead and decaying matter. It is found on deciduous trees such as Oak, Maple and Plum (4). Being a saprhophyte, reishi can be cultivated instead of being harvested from the wild.   Before people learned how to grow it, reishi was prohibitively expensive for many people because it is very rare in nature (1).  More common are other lesser-studied Ganoderma species, such as Artist’s Conk (G. applanatum), one that I’ve gathered and made medicine from.

The fruiting body of reishi– what most folks think of as the mushroom — can take several forms, all of them beautiful. It may be shelf-like in shape with no stalk, or can take on the appearance of an antler, with a long, branching stalks topped by small caps. Sometimes the cap is kidney-shaped with a stalk. The cap may be a variety of colors, ranging from brownish-red, brownish-orange and ochre to dark red and mahogany (4). In fact, Traditional Chinese Medicine classifies 6 different types of G. lucidum according to color, with the red-colored being the most medicial and the strongest (1). The edge of the cap may be yellowish or white. This striation often reflected in Asian “cloud mushroom” paintings.  The top of the cap or shelf is shiny, with a varnished or polished appearance (hence, “Varnished Conk”).  Both the fruiting body and the mycelium (the part of the mushroom “buried” in whatever substrate it’s growing in) are medicinal and have both overlapping and differing properties.

Reishi is an adaptogen* that is appropriate for folks of many different metabolic types or constitutions. Of the known medicinal mushrooms, it has the widest array of uses. I’ve used reishi myself to help deal with the physical and emotional stress of running a business and going to school at the same time. I’ve used it for other folks who were in need of both energy and grounding. These were folks who’s tendency was to try to do too many things at once (something I am often guilty of doing). I’ve also used reishi to support the liver, immune system and energy levels in a family member who was undergoing chemotherapy for cancer.

Many of the traditional uses of reishi have been supported by science, and hundreds of bioactive compounds have been isolated from it. One class of compounds, the triterpenes, are alcohol-extracted and are responsible for liver protective effects, antihistamine activity and adaptogenic effects of reishi. Another class, the polysaccharides, are water-soluble components of Reishi largely responsible for the immunomodulating effects. To get the broadest spectrum of activity of reishi, a combination alcohol extract and decoction is best.  Some of reishi’s uses are summarized here:

Cardiovascular health: Reishi is a heart tonic; it promotes the health and functioning of heart tissues (1, 2, 6). It can reduce blood pressure and keeps arteries pliable and soft (2). Reishi also reduces cholesterol**, possibly by multiple mechanisms (5).

Immune system: Reishi’s activity as a biological response modifier is well represented here. It can bring up a lagging immune response or tone down autoimmune responses, depending on what the body needs. This reflects the fact that reishi extracts are immensely chemically complex.  The mushroom builds the immune system at the level of the bone marrow, increasing production of macrophages, T cells and NK (natural killer) cells. It influences activation of immune cells as well (2,5,6).  Reishi influences the production of cytokines, signalling molecules involved in various arms of the immune system (5).  Reishi additionally has antihistamine activity, making it a good addition to antiallergy regimens (5).

Respiratory: In Asia, Reishi is commonly used for chronic bronchitis and asthma (1).  It also facilitates oxygen absorption in the aveoli and is used in Himalayas by climbing guides for altitude sickness (5).  It increases hemoglobin levels (7), thereby increasing the capacity of blood to carry oxygen to all the cells of the body.

Antimicrobial: Reishi has antiviral activity and has long been used for respiratory infections. In the lab, it exhibited activity against hepatitis B virus, various herpes viruses and HIV (8-11). Ironically, it has antifungal activity as well….even mushrooms need to protect themselves from fungal infections.

Cancer: In China and Japan, Reishi has long been sought after by those with cancer. It is an important fu-zheng herb, used as an adjunct to chemotherapy and radiation in China. Some hospitals in the US are starting to do this as well, including UCSF and Ceders-Sinai.  Fu-zheng prolongs survival, increases quality of life and protects the immune system from the damaging effects of both radiation and chemotherapy (7). Reishi is particularly valuable for those undergoing a bone marrow transplant (2).  In the lab, it exhibits antitumor activity, most likely mediated by it’s effects on the immune system. Studies in cell culture demonstrated that Reishi may inhibit tumor cell proliferation rather than directly killing the cells (12).

Aging: As mentioned, Reishi has been used for milelenia for longevity.  Research confirms that has antioxidant/free radical scavenger and antiinflammatory effects (5).

Digestion & metabolism: Reishi promotes nutrient absorption (2), a useful property for those with wasting diseases. Moreover, it is good for those with faulty blood sugar regulation (2).

Mental/Emotional: Reishi is useful for those suffering from insomnia and anxiety (1). It is calming, though not overtly sedating (you can drive a car after taking it). In Traditional Chinese Medicine, Reishi nourishes the shen.  The shen is translated as “spirit” and is reflected in emotional, spiritual, mental and physical health (13, 14).  Reishi has a grounding energy. I first learned this in class, where we were given a couple drops of the extract to take after sitting quietly for a minute or so.  Rather quickly, I felt heavier, like I was sinking deeper into my seat and my feet were becoming more firmly fixed to the ground. We weren’t told what to expect before sampling Reishi and many of us had the same experience.  For comparison, we took a couple drops of Echinacea extract shortly after…totally different feeling. Try the 2 of them back-to-back, it’s interesting.

Environmental: Reishi may be useful for heavy metal cleanup. The fruiting bodies were found to be more effective than a commonly used heavy metal adsorbant in adsorbing copper (15), and to also adsorb Chromium (16).

Footnotes
*A thorough definition of “adaptogen” by herbalist David Winston (6): “Adaptogens are herbs that are nontoxic, produce a nonspecific defensive response to stress, and have a normalizing influence on the body. Adaptogens help the body adapt to stress, support it’s normal functions, and restore balance. They increase the body’s resistance to physical, biological, emotional and environmental stressors. They are unique from other substances in their ability to balance endocrine hormones and the immune system and allow the body to maintain optimal homeostasis.”

**The idea that cholesterol is “bad” is not accurate. Cholesterol is necessary for many bodily functions and can become elevated due to inflammation and injury somewhere in the body (the blood vessels, for instance).  It acts as a band-aid, coating the injured or inflammed site and is essentially the “smoke”, the indication that something is awry, rather than the “fire”. This will be discussed in more detail in a future post.

Disclaimer: The information on this website is for educational purposes only & has not been evaluated by the Food and Drug Administration. This information is not intended to diagnose, treat, cure, or prevent any disease.

This entry was posted in Herb Notes. Bookmark the permalink.